Ministry in the Community

One of the calls that brought me back to parish ministry, as opposed to chaplaincy, was social justice. I missed working in the community on causes of concern, on activism which my chaplain's residency left me little time to engage. Most of my young adult life was spent doing community service and political activism - from serving on a committee for Habitat for Humanity, to leading a community forum opposing a dangerous industrial plant set to open near a poor, predominantly African-American neighborhood - and I longed to re-engage this wider community advocacy. In particular now, one part of my call back to settled ministry is the need to dive more deeply into the specific justice needs of one community, and to build ongoing relationships with a cadre of local activist partners.
Plus, while periods of introspection can be appropriate in helping a church or fellowship consider its ministry from a broader perspective, I believe it is detrimental to the life of any congregation to become solely inwardly-focused, as some tend to do during interim ministry periods. That's part of why I usually stayed involved in social justice ministry, even at my interim positions. Also, in addition to my own work toward justice causes, I see one part of my role as settled minister to encourage a church to explore its social justice work, and when necessary, consider new ways to engage the community.
Two areas in particular have been at the forefront of my social action work. One is advocacy as an ally with the gay, lesbian, bisexual, and transgender (GLBT) communities in the places I have served. In San Antonio, I worked with a GLBT advocacy group including leaders of several local faith communities, working on projects from a Christmas collection drive for the local AIDS Foundation, to coordinating the annual interfaith Pride worship service in June. In College Station, I worked with a liberal campus minister to organize the first ever interfaith Pride service at Texas A&M University. In Greensboro, I worked with faith leaders throughout the city, and queer activists across the state, to organize meetings and training sessions in opposition to the anti-marriage-equality Amendment 1. I also traveled to the steps of the Supreme Court building in Washington, DC, to take part in the United for Marriage rally on the day the Court heard arguments on same-sex marriage. 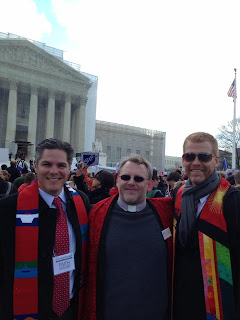 participating in the United for Marriage rally
w/ Revs. Dan De Leon (left) and Darryl Kistler (right),
March 26, 2013
In Harrisburg, Pennsylvania, I had the honor of serving when the state gained marriage equality. The day the ruling was announced, I quickly arranged to open the church three days later (the day the ruling took effect) to host multiple weddings at the church. Four weddings in one day was a new record for me, but completely worth it. Following that experience, I arrived at The Church of the River in Memphis. I was surprised to learn that they had never pursued recognition as a Welcoming Congregation to the LGBTQIA+ community, despite examples of clear welcome going back 30 years to the height of the AIDS epidemic. We pursued that program in Memphis, and in January 2017, the church voted unanimously in favor of Welcoming Congregation status. 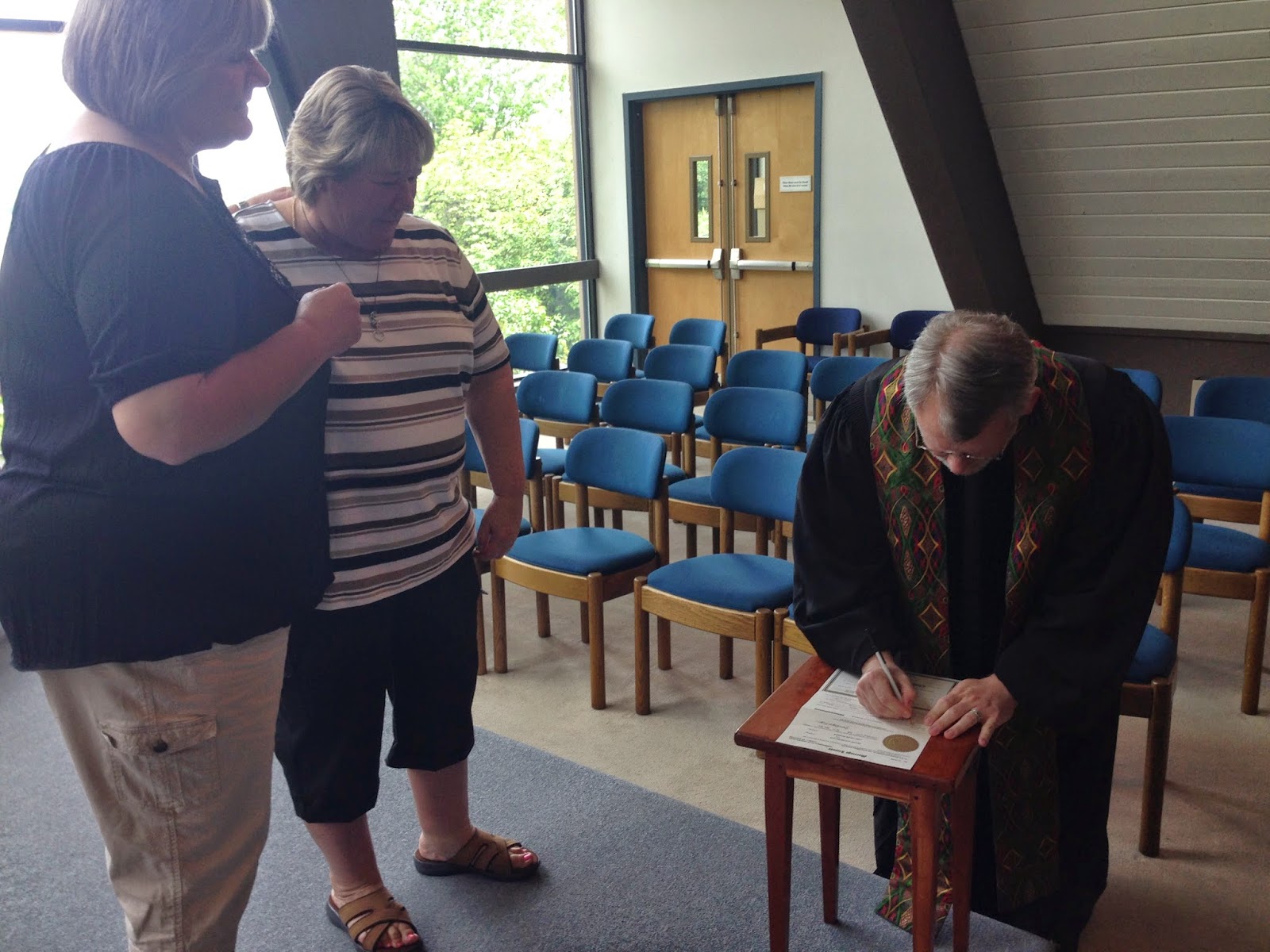 Signing the marriage license for the first
same-sex marriage legally recognized in
Dauphin County, Pennsylvania
May 24, 2014
The other aspect of activism that has dominated my focus is grassroots community organizing work. In San Antonio, I became involved with COPS and The Metro Alliance, two of the nation's most successful community organizing groups (affiliated with the Industrial Areas Foundation, or IAF), to meet with organizers, participate in accountability assemblies with political candidates, and advise leaders on strategy for future campaigns. In Greensboro, I worked with Occupy Greensboro's Alliance Building Working Group to make connections throughout the community, and led interfaith worship at the encampment site. While serving in Harrisburg, a church member and I traveled to North Carolina, to attend the Moral March in February 2014, showing solidarity with a broad coalition of activists practicing a new "fusion politics" as the gathered to improve their state from the many ways peoples were being marginalized. In Memphis, I was part of the core organizing team for the newly-forming local chapter of Showing Up for Racial Justice (SURJ), which has a mission of "organizing white people for racial justice" and often functions as a de facto "white people's auxiliary" to local chapters of Black Lives Matter. I then worked with other faith leaders in Memphis and an organizer from the national Gamaliel Foundation (another national community organizing foundation) to form MICAH, the Memphis Interfaith Coalition for Action and Hope. This effort, though in its early stages during my ministry there, was particularly successful in that several church members also became involved. I have continued such work in Boulder, as part of the faith leaders' caucus for Together Colorado. This work equipped me to promote the right of conscience and the use of the democratic process, in ways that helped produce real results in the communities I serve. 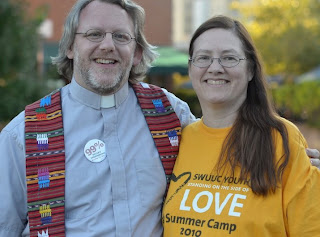 with my spouse, Suzi, at the Occupy Greensboro march,
October 15, 2011
Yet social justice work is not the only engagement we UUs can have with our larger community. Unitarian Universalism has a saving mission - overcoming divisions of belief with the spiritual power of love, liberating each other from oppressions including homophobia and transphobia, and healing the toxic pain of shame through affirmation of inherent worth and dignity. We UUs are called to carry this message out into the world, living out this mission not only in our advocacy for justice, but in our everyday relationships with friends, neighbors, and co-workers. We do not put on and take off our UUism as we step into and out of the church building, as if our faith is some comfy bathrobe. Our Unitarian Universalism is to be made real in our lives 24/7.
The question of how we might embody our UU mission throughout our lives, and what impact this will have on our churches, is one I have explored deeply in recent years. I am a part of a cohort of UU religious professionals - ministers, religious educators, seminarians - exploring the new "missional church" paradigm. This model encourages a shift from thinking of church as a place where people come to get their own spiritual needs met per a consumerist mindset (AKA the "attractional church" model), to viewing the church as a place that prepares people to go out into the world to meet its needs. While this model originated in some evangelical Christian circles, our cohort is exploring how this model can inform and enrich our experience of Unitarian Universalism, while ever affirming a distinctly UU approach to liberal religion. For example, the congregation in Olympia was in discernment whether or not this call should extend to the construction of tiny houses on church grounds, in which members of Olympia's homeless community would be welcomed to live. While a shift like this is not right for every congregation, and I am very happy to minister to any church seeking greater health and vitality, I will be particularly interested to explore this missional paradigm with any congregation hoping to deepen its practice, understanding, and living out of its Unitarian Universalist faith.